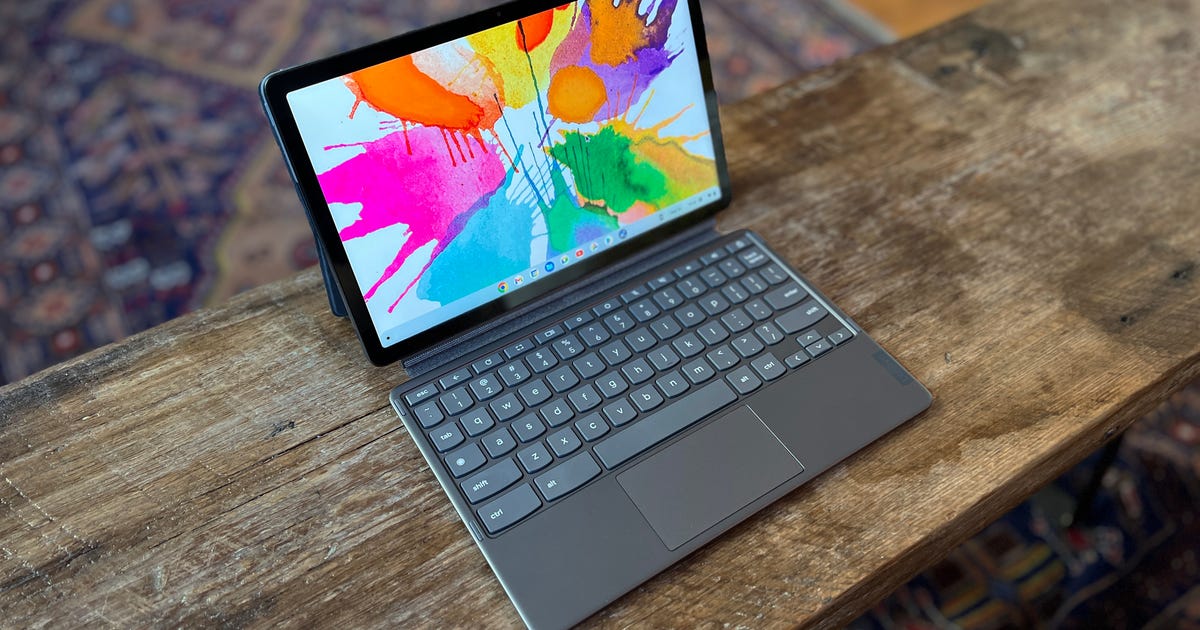 I like cheap laptops. More accurately, I like good cheap laptops… but those can be hard to find. For every hundred bucks that gets trimmed off a laptop’s price, its features, design and performance all typically take a hit. But when I find one that rises above Black Friday doorbuster level, it’s something to cheer about.

If you need a budget laptop that looks decent, has a passable keyboard, is small enough to go anywhere and is flexible enough to double as a video-streaming tablet, then check out the Lenovo Duet Chromebook. It’s not especially fast, and the touchpad isn’t great, but it’s still one of the best computers you can buy for under $400. Just note that it makes a better secondary or travel laptop than a primary device — which is something I’d say about almost any 11-inch laptop.

Currently selling for $379, this is an 11-inch ChromeOS tablet with a keyboard cover and kickstand. That means it can work as a standalone touchscreen tablet, or as a clamshell-like notebook. In that way, it’s kind of like a cheaper Microsoft Surface 2-in-1. The version tested here has 64GB of eMMC storage, but the model in stores right now has 128GB, which is a plus.

Microsoft already makes a budget Surface, the most-recent version of which is called the Surface Go 3. It’s $400 and runs Windows instead of ChromeOS, and has an Intel processor instead of the Snapdragon 7c here. But the biggest practical difference to me is that the Lenovo Duet includes its pretty darn good keyboard cover in the box, while Microsoft forces you to buy its keyboard cover for an extra $100 to $129, depending on the color. When shopping at this end of the budget pool, a 25% premium to get the keyboard (which is a must-have) makes a big difference.

As a Chromebook, the Duet is less capable than a Windows device in some respects, but as modern Chromebooks can run almost any Android app, the use cases where this would make a real difference to you continue to narrow. And head-to-head, a sub-$500 computer running ChromeOS is usually going to feel speedier and more responsive than a similarly priced Windows PC, because of the lighter OS.

I’ve always said the keyboard cover design and build quality are the best things about the Surface line, and that’s true for the Lenovo Duet as well. The Lenovo keyboard is similarly solid, not flimsy like some other clip-on keyboards, and its smallish keys have excellent depth and a satisfying clacky feel. The tiny touchpad, in contrast, is the single most annoying thing about this system — it’s usable, but doesn’t feel as accurate or responsive as I’d like.